How to Transfer Nexus Apps to Computer?

Imagine that you just have received a new Google Nexus 6 mobile phone as your birthday gift, but you just be in the trouble of how to copy apps from your old Nexus 5 to the new Nexus 6, especially your favorite game applications. You just wonder if there is a way to copy apps between the two phones, while keeping the game progress. Well, actually you can transfer apps from your old Nexus to computer and then restore the transferred apps from computer to the new Nexus 6. And to help you finish the whole process, we introduce a capable tool to you.

Coolmuster Android Assistant provides you with the ability to transfer files, namely apps, photos, videos, music, contacts, text messages and many more from Google Nexus 10/9/7/6/5/4/3 to PC, while not change the original file quality at all. With it, you can backup Nexus app on computer and then restore the backed up apps to another Nexus later on. At the same time, you can use it to download various apps from web to your Nexus, and even uninstall your unwanted apps from Nexus with one click.

In this article, we will show you how to do the apps transfer from Nexus phone/tablet to computer step by step, with the help of Coolmuster Android Assistant. Download the program to begin.

Step 1. Connect your Nexus phone to the PC

With the Nexus apps transfer - Android Assistant installed on your computer, you can launch it and connect your Google Nexus to the computer either via the USB cable or Wi-Fi. Your Nexus phone will be detected and shown up in the window.

As I mentioned above, you can transfer Apps, Music, Photo, Video, File, Book, Contacts, etc. from Nexus to computer. Therefore, you need to open "Apps", preview and select the applications you want to transfer to computer. Then, click "Export" button to begin the transfer process. 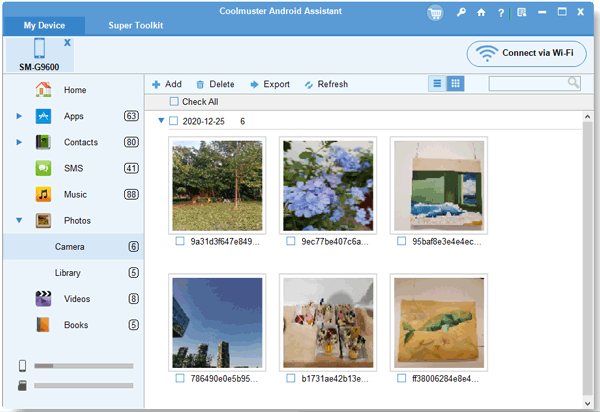 Now, download this Android Assistant to transfer apps from Nexus to computer.