How to Manage Sony Xperia Z Contacts on Computer/PC

At the International CES (Consumer Electronics Show) in 2013, Sony released its latest flagship smart phone model - Sony Xperia Z in Las Vegas. This Sony Xperia Z is based on Android 4.1 OS with good configuration, so that the price is relatively high, but this does not preclude the popularity of this mobile phone around the world. According to user reviews, they are quite satisfied with the amazing screen, powerful photographed function and waterproofness. However, there are still some inconvenient of operating it. For example, if you have a long contacts list, you are likely to touch the wrong buttons when you edit contacts. In this situation, you can find ways to manage Sony Xperia Z contacts on computer. As a matter of fact, many mobile phone users have this kind of idea to manage Sony Xperia Z files on PC. Here I suggest you to try a Sony Xperia Z Desktop Manager.

As you know that contacts are always stored on the internal phone memory, or you can set up to save them on the SIM card. And no matter which location you choose to store your contacts, they are forbidden to be accessed on computer without an assistant software. This Coolmuster Sony Xperia Z Desktop Manager is exactly what you need. With it, you are able to view all files of your Sony Xperia Z phone on computer, including contacts, text messages, photos, videos, and so on. In addition, it also enables you to add, delete and edit contacts on PC as you want. In particular, this program can help completely transfer contacts to computer as a backup file, so you needn't worry about losing them accidentally.

Apart from these functions mentioned above, this Sony Xperia Z Desktop Manager has more features available for you. Now you can download the free trial version and have a try by yourself.

Step 1. Download, Install and Launch the Program on PC

Firstly, as this program has both Windows and Mac version, you should download the right version on your Windows/Mac computer. Then install and operate it. After that, you need to connect your Sony Xperia Z phone to computer via USB. When you run it on PC for the first time, you should enable USB debugging on your phone( see picture). Thus this software will detect your mobile phone successfully. Soon it will start to install USB driver on your computer. 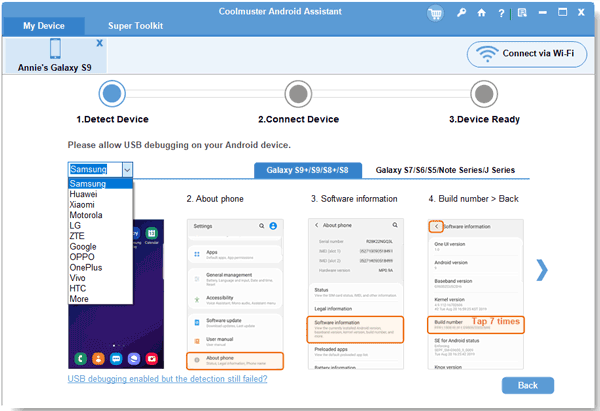 After installing USB driver, this program will begin to scan your phone data thoroughly. Wait for a while, you will get a menu as following.

According to the above picture, you can see that all files are arranged on the interface, including Apps, Music, Photo, Video, Contacts, and so on. Click "Contacts", the whole contacts list will be displayed with details. Now you can add, delete, edit and backup contacts at will by pressing "New", "Delete", "Modify" and "Backup".

By the way, there is a search box for you to find the specific contacts in a short time. What's more, this Coolmuster Sony Xperia Z Desktop Manager can also help you send text messages to others, you just touch the "Send" option to edit SMS. Now just download the Windows/Mac version on computer and entirely manage your Sony Xperia Z mobile phone.

How to Print Out Text Messages from Sony Ericsson

How to Transfer Contacts from Sony Ericsson to Computer