Samsung Galaxy Note 9: Everything You Want to Know

Even though Samsung Galaxy Note 9 has not released yet, there are a lot of rumors and assumptions about its design, features, specs, price and more around the world. For Galaxy Note 9, you can expect that it has a more powerful big screen, upgraded cameras and a whole new Bixby assistant. The following content is everything we know so far.

The official release data of Samsung Galaxy Note 9 is August 9th, 2018, after Samsung sent an invitation on June 27th. And the unveiling will start at 11am EST (8am Pacific Standard Time, 4pm British Summer Time) in Brooklyn, New York. 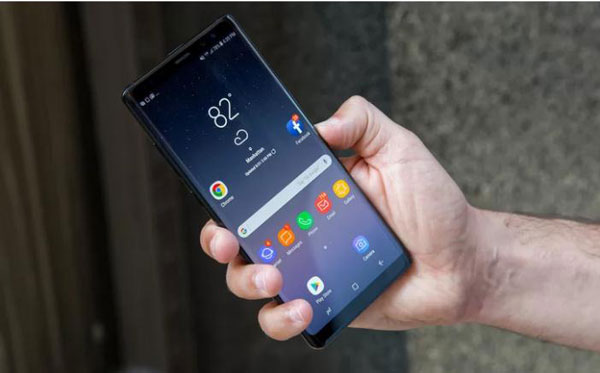 Usually, Samsung Galaxy Note devices will land in stores a few weeks after it is released, which is before or around the time when Apple launches its next iPhones in September. It is believed that it helps Samsung get more confidence from customers, and this year is likely to be the same comparing with previous ones.

Besides, a report at ET News indicates that August 24 will be the global release date and reservations will be open sometime in mid-August. However, we will not know this information for sure until Samsung announces it on August 9.

From Evan Blass's Twitter, it can be predictable that Samsung Galaxy Note 9 has 3 colors: black, blue and brown. The the proposed lilac model can't be seen, so it's unclear whether this version will be available at the time of release. 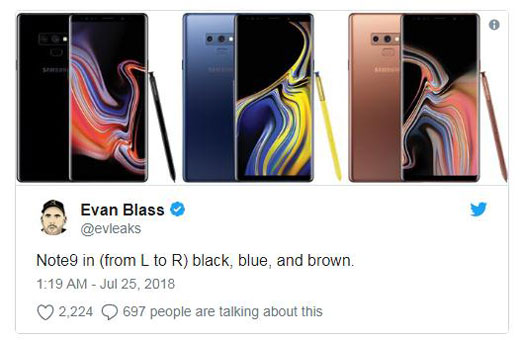 Samsung has released a new trailer video as below, which seems to confirm the rumors that Galaxy Note 9 will be equipped with a souped-up battery. This clip contains clearly a shot from rival Apple, showing how frustrating it is when your battery runs out and promising that Samsung's upcoming flagship product will save the day.

If the online noise can be believed, the Galaxy Note 9 will be equipped with a 4,000mAh battery, which is 20% higher than the Galaxy Note 8's 3,300mAh. It is the largest one in the history of Samsung smartphones.

* Camera: An enhanced dual-camera with ISOCELL Plus technology.

* Fingerprint Scanner: Rear-facing and below camera. 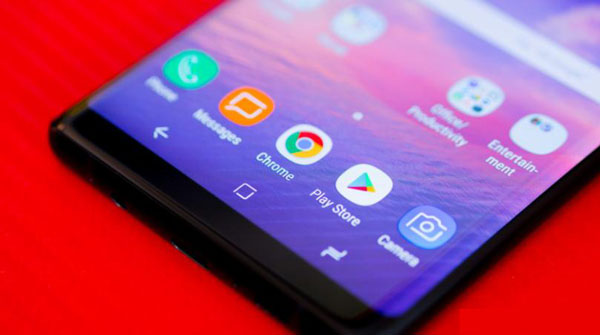 Actually, there is nothing major change in design. Although there are reports showing that the screen glass is relatively thin, it is expected that the chassis will increase slightly. It is 0.2 mm thicker than Note 8 and 1.3 mm wide, which can accommodate larger screens and higher capacity batteries, which also makes it a bit heavier, as confirmed by the first Note 9 actual review. The height reduction of 1.1 mm means that the top and bottom borders are further reduced, but both will remain (don't believe that Samsung will give up the bottom bezel). 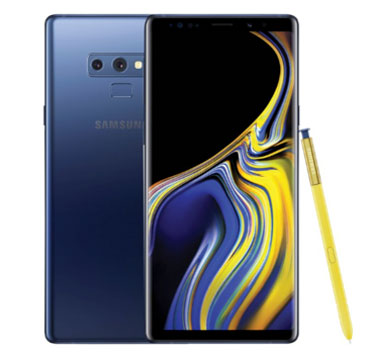 Transfer Data from Samsung Galaxy S8/S7 to S9/S9 Plus

Samsung Galaxy S9 vs iPhone X: Which is Better?

How to Transfer Data from One Phone to Another [Safe & Quick]

How to Transfer iCloud Photos to Android [2 Methods]

Switch to Galaxy S9/S9+: Transfer Data to Switch from Android to S9/S9+