Early in 2017, Android has occupied more than 80% of all smartphone sales to end users worldwide, and this figure is still increasing in 2020 for its inexpensive price, easy operation and smooth system. No matter you update operating system or change a new phone, an Android sync manager is a must for most people. If you are anxious to find a great Android sync app for backup, you can refer to this article which compares top 11 popular Android sync software in the market, and you will surely know which one is best for you. 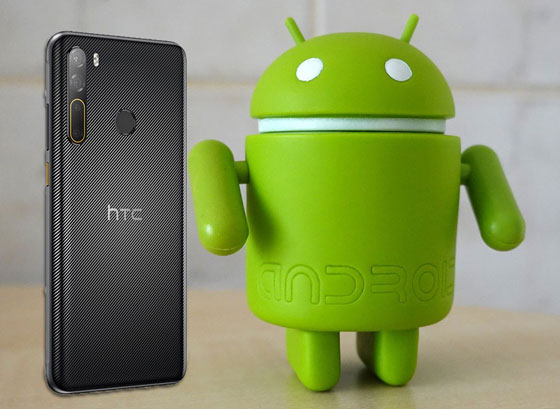 This part will introduce 2 kinds of professional Android sync managers for you. With the detailed desicription, it is easy to know their features below.

The first powerful Android sync manager I strongly recommend to you is Samsung Messages Backup, which can manage, transfer, backup and restore all Android data. And it supports multiple files, like contacts, messages, call logs, photos, music, videos, documents, user apps and eBooks from Android device. You can freely sync Android phone with PC using it.

* Install and uninstall apps from computer.

* Wide compatible with most Android brands.

* Not a free Android sync software.

Samsung Data Transfer is an Android sync manager second only to Samsung Messages Backup. It mainly concentrates on phone to phone transfer on PC and supports both Android and iOS operating system. Besides, it supports four modes: Android to Android Transfer, iOS to iOS Transfer, Android to iOS Transfer and iOS to Android Transfer. As a whole, it supports contacts, SMS, call logs, music, photos, videos, user apps and documents, however, the file types vary with different operating system.

* One click to transfer data between two phones and it supports Android and iOS operating system.

* Transfer contacts, calendars, bookmarks, eBooks (PDFs & ePubs) and notes (not supported in iOS 11 or later) from iOS to iOS.

* Transfer contacts and eBooks (PDFs & ePubs) from Android to iOS. 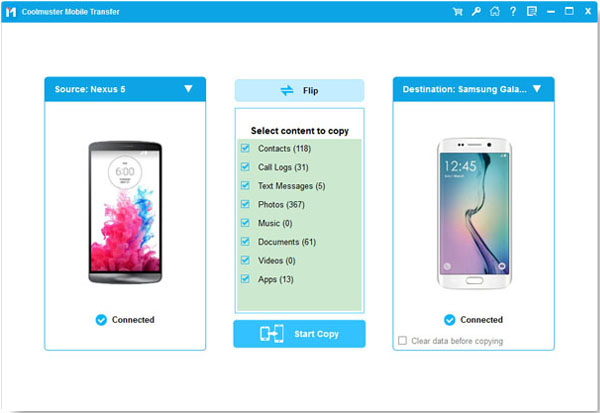 * Android devices with Android 4.0 and later.

* Not a free Android sync app.

* $25.95/PC for one year license, $35.95/PC for lifetime license and other individual purchase plans for more devices.

The second section is going to display 9 kinds of third-party Android sync apps to let you have more choices.

doubleTwist is a powerful Android to PC sync manager which centers on music sync. With this Android phone sync, you can sync music from computer to Android phone or tablet, backup music onto computer, subscribe to podcasts and listen to live music, just like a music player and podcast manager for Android device. And you do not need to jump between different apps to play music, manage podcasts or sync iTunes playlists. Well, besides music, it also syncs videos and photos.

* Listen and manage music and podcasts. 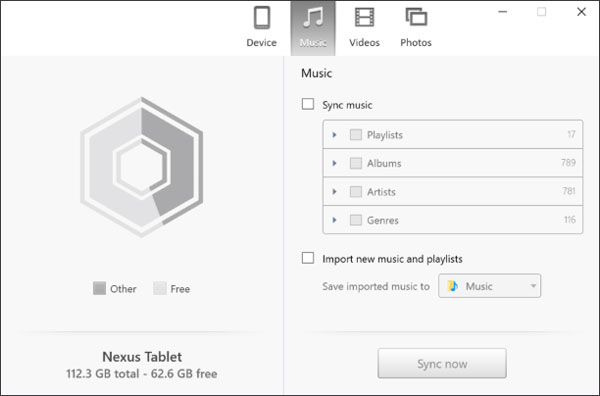 * Fast, easy to use and simple interface.

* Easy music, photo and video syncing between Android and computer.

* Only support to sync music, videos and photos.

Android Sync Manager WiFi is an Android sync manager which enables you to sync Android to PC under same Wi-Fi connection. You can transfer messages, emails, contacts, images, videos, applications and music between PC and Android mobile, as well as backup mobile files, applications and settings.

* Provide built-in Android App Store feature for you to install applications and games. 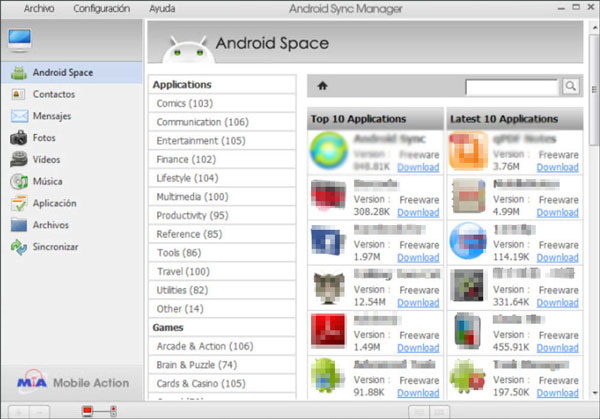 * Outlook 2003 and above for syncing with Outlook.

* Quick and easy to install.

* No restriction on specific file formats.

* Transfer is a bit slow at times.

* New update is not available.

Android PC Sync Manager is an Android sync software which can transfer or backup all Android data, like contacts, messages, music, photos, etc., to or from personal computer. Besides, it also supports to organize all contents on computer.

* Manage installed apps or make a backup to hard drive.

* Manage media files, photos, images, videos and music and save to computer. 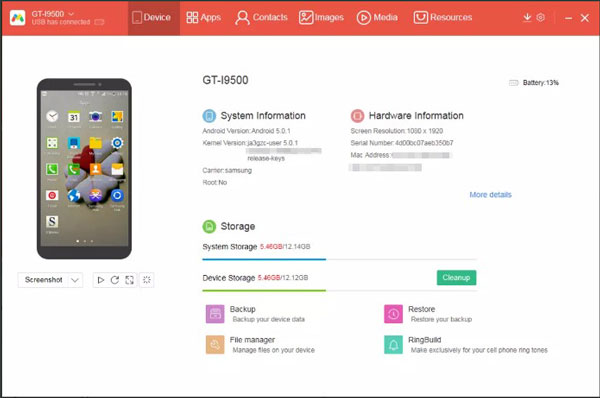 * Files more than 21 MB will affect the system stability in some operating systems.

SyncDroid is a good sync software for Android, which supports to sync contacts, messages, call logs, music, videos, photos, eBooks and more from Android to PC. Besides, it also supports to backup and restore as well as manage Android data. 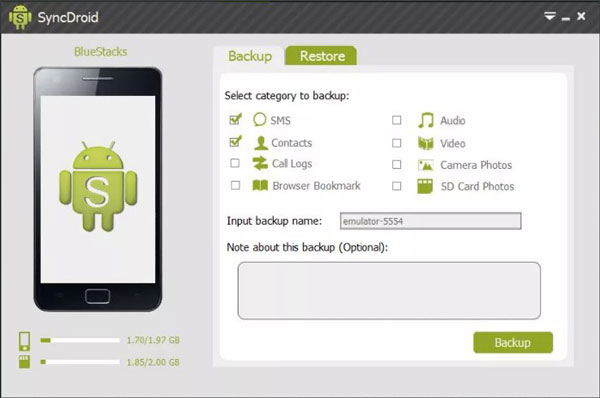 * Compatible with most Android phones from Android 2.1 to 6.0.

SyncMate is an Android sync app for Mac. It syncs and backs up contacts, text messages, calendars, photos, videos, documents, etc. from Android to Mac. Besides, it also syncs data from online accounts or other devices.

* Sync with MTP, mounted devices and other Macs. 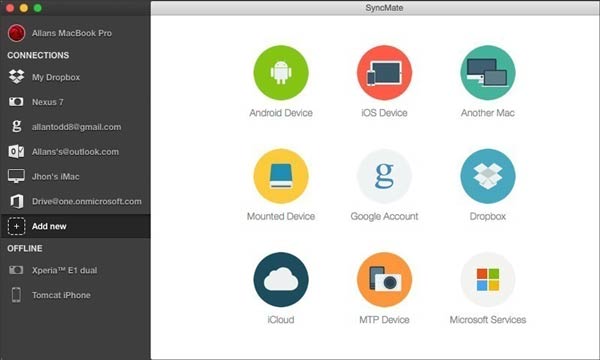 * Not compatible with all Android devices.

* Only SyncMate 4 has Windows version.

* Free version for contacts, calendars and syncing in background.

The Android sync manager - Sync Manager is a handy tool for you to sync all Android data, like contacts, messages, photos, music, etc. You can sync data in background between any folders, different hard drives or devices. 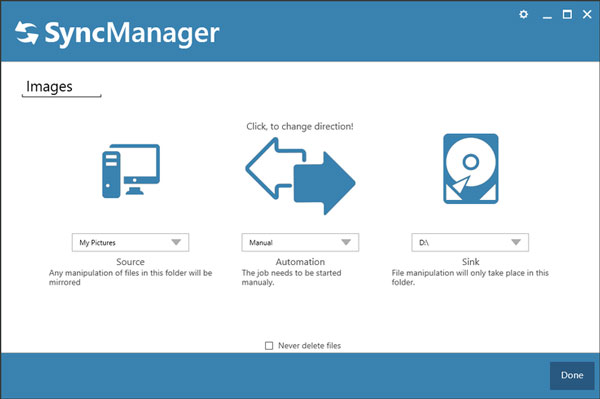 * Simple interface and easy to use.

* Not updated for years.

Android-Sync is an Android sync manager which syncs Android phones contacts, calendars, tasks and notes between Android and Outlook via USB connection directly on PC.

* All contacts birthdays, notes, photos, categories and other details are included.

* All tasks and notes' categories, reminders and other information are supported. 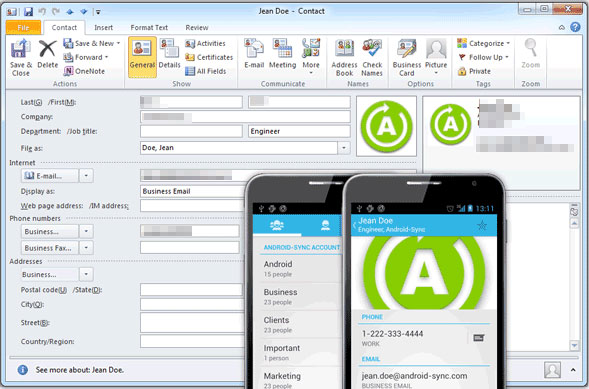 * An Android to PC sync mainly centers on contacts, calendars, tasks and notes.

* Easy to use and connect.

* Compatible with many Windows computers.

Droid Sync Manager, published by Omar Bizreh, can also sync Android phone with PC. It supports to sync Android files, videos, photos and other types to your computer.

* Transfer files and folders between Android smartphone and computer. 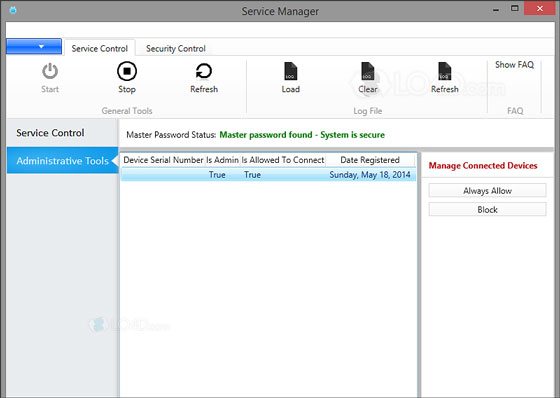 * Not updated for years.

The last Android sync software is HTC Sync Manager. You can easily sync all your media data, contacts, calendar events, bookmarks and documents between HTC phone and computer. After syncing, you can manage and organize data on computer as well.

* Organize photos, videos and music into albums on computer and sync backup to phone.

* Sync personal information, like contacts, calendars and web bookmarks, between computer and phone when connected. 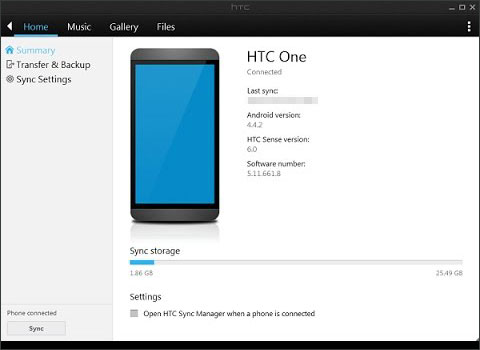 * Not compatible with all Android phones.

There are numerous Android sync managers online, but not all Android sync apps fulfil your demand. In this article, we compare top 11 Android sync software in the market and you can clearly understand their features and which one is suitable for you. As far as I can see, a comprehensive Android sync manager, which contains all other apps' feature, may be an optimal choice. Thus, I highly recommend you to sync Android phones via Samsung Messages Backup or Samsung Data Transfer. Of course, you can select any one Android sync manager upon your free will.

If you encounter any problem during use, feel free to leave a comment here.

Android SMS Manager: How to Manage Messages on Android with 3 Practical Methods

How to Back Up Samsung to PC Easily? - 6 Ways You Can't Miss