In the last post, we tell you how to sync Samsung media files with computer by using third-party software like Coolmuster Android Assistant, which is professionally in transferring and managing Android data via computer. Actually, Samsung company has its own Samsung data manager - Samsung Kies, which is designed to manage and deal with the data stored in Galaxy phones. Even though Samsung Kies can do some of the same or similar functions as Android Assistant, there are still inherent problems in the use of Kies. Some of the more commonly known include the following:

* Limited to certain file formats and Samsung devices. i.e. Meaning the software does not recognize files like .avi.
* Only designed to apply to phones and tablets that have been produced by Samsung company, it is not compatible with other Android devices like HTC, Motorola, ZTE, LG, Sony, etc.

Although Samsung Kies has shortcomings, it still has the ability to help you sync your Samsung photos, videos and music files. The following tutorial will guide you through the detailed process:

How to Sync Samsung Photos/Videos/Music with Kies?

Step 1. Add photos, videos and music to the Library

Run Samsung Kies on your computer. Navigate to the left side panel and select a data category. For example, we select "Music" in the Library column and press the "+" button to add music files to the Library from the local folders. 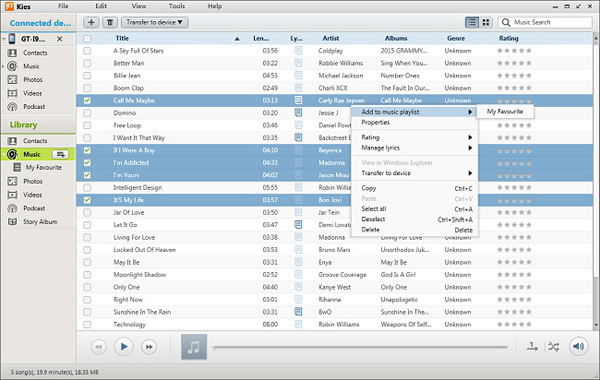 Connect your Samsung phone to the computer and once the connection is enabled, you can click the "Sync" panel from the top interface, tick the files you need in the Multimedia section and hit on the "Sync" button at the top-right corner. 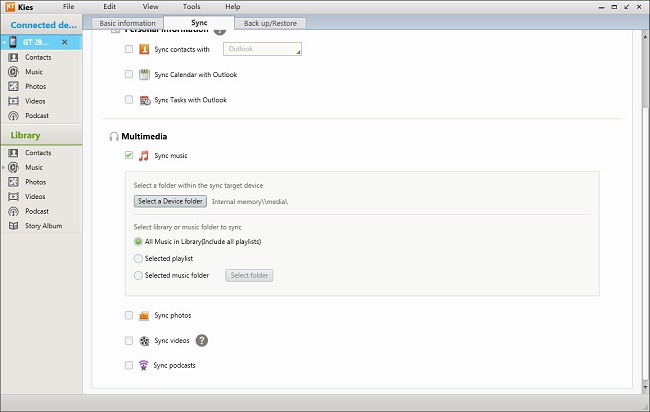 When the synchronization complete, you can check the files in your phone one by one.